How to change the Z endstop (BCN3D Sigmax)

If you need to order a new Z endstop, contact your reseller, or BCN3D sales team at sales@bcn3d.com.

In the early version of this component, the cable is soldered to the endstop terminals, but in the current version, the cable and the endstop can easily be separated, making the exchange of the component easier.

To change the endstop, turn off the printer and simply remove the two screws that hold it place using a 2mm allen wrench.

Once the screws have been removed, detach the cable from the endstop terminals and connect the new endstop, paying attention to the original connection of the cables.

Before removing the cable from the endstop terminals, pay attention to the positioning of the cables in order to connect these properly on the new endstop

If you are having issues accessing the endstop screws you can remove the X axis belt to have better access to the screws.

To make this procedure easier, it's recommended to remove the hotend from the printing head.

To do so, turn off the printer and unplug it.

Remove the two screws that hold the hotend to the plate in order to remove it, using a 2.5mm allen wrench.

If your hotend has a tie wrap holding the cable to the printing head, make sure that you cut it before removing the hotend. 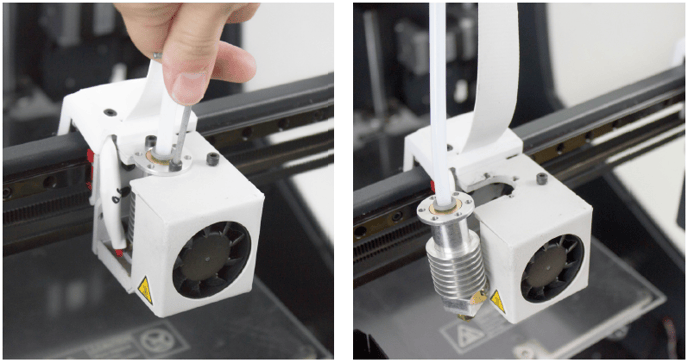 Depending on your Sigmax version you'll have to remove this using a 2mm or 2.5mm allen wrench.

Remove the upper cover by loosing the screw on its top. Slighltly loosen the two side
screws that hold the fan in place. There’s no need to loosen this screws completely, just enough so the upper cover can be removed.

Depending on your Sigmax version you may not have a cable holder installed, as the holder is already on the inner part of the connection cover. If that's the case, just make sure sure that the cables are properly routed once you install the cover back in place.

Disconnect the endstop cable from the extruder board.

Remove the endstops screws, and then run the new endstop’s cable through the side fan cover from below. Connect it to the extruder board, and screw it to the printing head. If you are having issues accessing the endstop screws you can remove the X axis belt to have better access.

Remember to put the belt back in its place if you have removed it.

Once the new endstop is installed, assemble everything back as it was, and make sure that the endstop is working correctly by performing a bed calibration.