Learn More about This Parameter:

the speed the layer fans rotate. A higher speed allows better cooling of the material during printing and reduces oozing, but can also increase material shrinkage.

This configuration is divided into the following parameters: 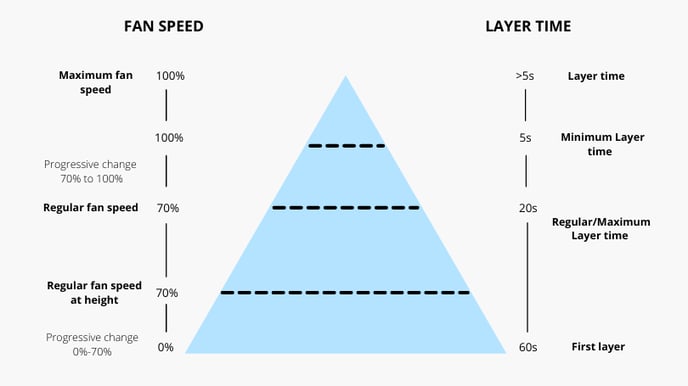 Layers that print slower than the threshold use the fan at normal speed. For faster layers,  the speed increases gradually until reaching the maximum fan speed.

This way, the model is correctly cooled following the thickness along the Z-axis.

This modifies the fan speed only on the first layer. This speed is stable until the normal speed height is reached.

To ensure the correct adhesion of the first layer to the printing surface, it is recommended to reduce this speed to 0%

This is the height where the fans change to normal speed from the initial fan speed. Increasing this height has the advantage of improving adhesion to the printing surface but it can also lead to the appearance of oozing on the piece. A height of 0.8mm is sufficient

Determines the minimum time that a layer should be printed. If a layer takes less time than inputted value, the printer reduces the speed to achieve the minimum layer time. This allows the printed material to cool down properly before printing the next layer.

This is the minimum speed that the printer is required to print. This way, the correct material flow is maintained and the printing result is not compromised.

Enabling this setting allows the head to move away from the piece during the printing process. This occurs when the minimum layer time is not reached, even when printing at the minimum speed.

The head will wait until the minimum layer time has passed and then continue printing. This gives the printed material enough time to cool down at a minimum speed.

Need more tips? Check out our forum community for help.

It's important to keep your printer in good shape to make the most out of it. In this chart, you can find a list of the extruder maintenance procedures and how frequently these should be done.

Take your e-waste to a certified recycler. Check how we do it in BCN3D.